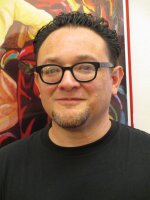 JONATHAN XAVIER INDA is Professor of Latina/Latino Studies and affiliate faculty in the Department of Anthropology and the Unit for Criticism and Interpretive Theory. He earned a Ph.D. in Anthropology from the University of California, Berkeley and an A.B. in Public Policy from Stanford University. He has written about anthropology and globalization, Foucauldian social theory, the geneticization of race, and the government of immigration. His books include Race, Identity, and Citizenship (1999), The Anthropology of Globalization (2002, 2008), Anthropologies of Modernity: Foucault, Governmentality, and the Politics of Life (2005), Targeting Immigrants: Government, Technology, and Ethics (2006), and Governing Immigration Through Crime (2013).

Professor Inda's latest book, Racial Prescriptions: Pharmaceuticals, Difference, and the Politics of Life (2014), explores the politics of dealing with health disparities through targeting pharmaceuticals at specific racial groups (specifically African Americans) based on the idea that they are genetically different. It suggests that while racialized pharmaceuticals are ostensibly about fostering the vital forces of the biological body, their politics of life also raises questions concerning the biologization of race. Given the United States’ historical experience with racial science, in which some groups have been classified as biologically inferior and others as superior, to geneticize and biologize racial minorities is to potentially open the door to stereotyping, discrimination, and marginalization.