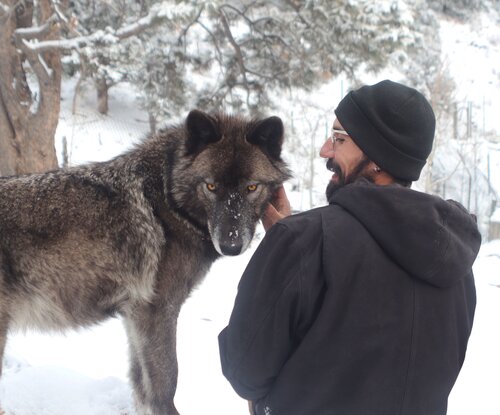 Austin is a PhD Candidate in sociocultural anthropology. In the past, his research has focused on political subjectivity, social movements, and the semiotics of protest. His work currently centers on the political ecology between humans, the state, wolves and wolfdog crosses or "hybrids" as it manifests through the contexts of the exotic pet trade, animal sanctuaries, and wildlife management agencies. Austin is interested in how these sites incorporate canids and other nonhumans into settler-colonial and biopolitical projects, and how these formations normalize and perpetuate both racial and anthropocentric violence. His work is also deeply concerned with modes of interspecies care, identity construction, and embodied communication.

Prior to graduate study, Austin was an organizer in the Fight for $15 movement, Food Not Bombs, Showing Up for Racial Justice (SURJ), and other grassroots causes. From 2016-2018 he was the Education Coordinator at Mission:Wolf, a nonprofit wildlife sanctuary in southern Colorado for rescued wolves, wolfdogs, and horses.

Unit for Criticism and Interpretive Theory

"It's time for U of I to Divest from Police and Invest in Black Lives" Smile Politely Op-Ed
"Sanctuary is Not a Place," Fieldnotes from the Present Blog Series, Kritik