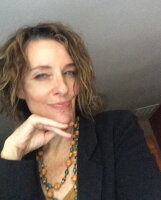 Ellen Moodie joined in solidarity with Central Americans in the 1980s. As a student at Indiana University, social-justice and anti-war movements inspired her to trace links between seemingly "ordinary" unmarked lives in Midwestern towns like hers, and events in the volcanic isthmus nearly 2000 miles away. After college she worked for seven years as a daily newspaper journalist in Hudson County, New Jersey. She pounded the police beat, chronicled Garden State corruption--and reported on issues linked to Central American migrants and refugees. She first traveled to El Salvador in 1993 with a sister-cities group.

That same year she entered graduate school at the University of Michigan in Ann Arbor. There her desire to document and denounce war atrocities, and track the violent postwar transition, grew to embrace the basic questions of social change: "How and when do conditions for possibility arise for transformations in public consciousness?"

Her first book, El Salvador in the Aftermath of Peace: Crime, Uncertainty, and the Transition to Democracy (Pennsylvania 2010), follows the circulation of the phrase “It’s worse than the war” in the years since peace accords were signed in 1992. Her second book, Central America in the New Millennium: Living Transition and Re-imagining Democracy, co-edited with Jennifer L. Burrell (Berghahn 2013), gathers anthropologists who work throughout the isthmus to explore the post-Cold War transition. She has written for American Ethnologist, The Journal of Latin American and Caribbean Anthropology, and Social Text, among other academic venues, and has contributed a number of chapters to edited volumes. Her national prominence as a scholar of Central America was marked by the publication in Annual Review of Anthropology of "The Post-Cold War Anthropology of Central America" (November 2015).

Her external awards and academic recognitions feature a residential fellowship at the Freie Universität in Berlin (2014); a National Science Foundation grant (2010-2013), and a Wenner-Gren Foundation grant (2008). Over her anthropological career she has won support from Fulbright-Hays, the Social Science Research Council, the United States Institute for Peace, the Organization of American States, and the University of Michigan. At the U of I, she is currently a Conrad Humanities Scholar in the College of Liberal Arts and Sciences. She received a Unit for Criticism and Interpretive Theory Senior Faculty Fellowship (2016-2018) for her project "Changing Epistemologies in Contemporary Cuba." She won two faculty fellowships from the Illinois Program for Research in the Humanities (IPRH) (2014-15 and 2007-8): four Campus Research Board awards, including one designated as an Arnold O. Beckman Award (2015), as well as a Humanities Release Time award (2013), and the Mellon Post-Doctoral Fellow in the Humanities (2003-5).

Professionally, she has served as the secretary and then co-chair of the Central America section of the Latin American Studies Association (2009-2014), and a councilor for the Society for Urban, National and Transnational Anthropology of the American Anthropological Association. She is involved in the El Salvador Studies Working Group and the Editorial Board for El Faro Academico in El Salvador.

Her public engagement continues long after leaving daily newspaper work. Today she often serves as an expert witness in cases involving Salvadorans fleeing violence and insecurity, and she has spoken and written about the asylum process and the situation in Central America.

Ellen Moodie’s research focuses on how political processes play out in everyday lives. In her first major project she studied after-effects of war and experiences of postwar violence in urban El Salvador. She considered social suffering as shared and shaped in everyday storytelling. She theorized how people's relationships with the state transformed in a much-lauded transition to neoliberal "market democracy." She has tallied more than six years of ethnographic research in Central America since 1993, including a year's sabbatical in El Salvador in 2012-2103.

Her current interest engages what she calls the “post-postwar generation” of activist middle-class youth in El Salvador, a group that has come of age with little or no memory of the country’s twelve-year civil war (1980-1992). She has also collaborated on a project on "post-insurgent subjectivities" among former guerrilla combatants in rural eastern El Salvador, studied short-term Christian mission and service travel, and analyzed sensationalism in mass media. Several years ago she began developing a project in Cuba, as well.

She takes an ethnographic approach to her research. She engages in long-term participant observation, joins in everyday activities and carries out conversational interviews. She talks to public officials and experts as well as many "ordinary" people; scrutinizes mass media coverage and policy debates; follows social media exhaustively, and examines archival records. Her analysis draws broadly from the insights of semiotic and linguistic anthropology.

Moodie, E. (2010). El Salvador in the Aftermath of Peace: Crime, Uncertainty, and the Transition to Democracy . (The Ethnography of Political Violence). University of Pennsylvania Press. https://www.jstor.org/stable/j.ctt3fj07w