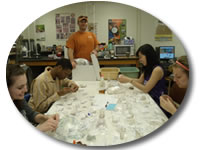 The Historical Archaeology Laboratory in 296 Davenport Hall is maintained by Prof. Chris Fennell and operated by his current advisees and doctoral candidates. Our research projects address aspects of historical archaeology, African diaspora heritage, and industrial archaeology, and the dynamics of social group affiliations among African Americans and European Americans in the eighteenth and nineteenth centuries. These research initiatives include the development of interpretative frameworks focusing on diaspora studies, regional systems, social group identities, ethnic group dynamics and racialization, stylistic and symbolic elements of material culture, and analysis of the development of craft and industrial production methods. Among other projects, we are collaborating on a multi-year research project concerning the social history of New Philadelphia, Illinois, a demographically integrated town founded by a free African American in 1836. Another initiative focuses long-term research on African-American craft innovations and industrial-scale production activities in the Edgefield Pottery District in South Carolina.

Research in the Evolutionary Biomechanics lab is focused on understanding the function and evolution of musculoskeletal systems.  We pursue questions concerning the mechanical determinants of posture and gait in extant and extinct hominins and other mammals, the ways in which locomotion influences skeletal structures during an animal’s lifetime and over evolutionary history, and how locomotion influences neural and cognitive evolution. This lab is directed by Prof. John Polk.